Meeting length is predicted to remain essentially unchanged throughout the region overall. Respondents in China do, however, anticipate minor increases in the length of training meetings and product launches. In line with predicted attendee declines in the country, Singapore is expected to see small decreases of less than  one per cent in days per meeting for several meeting types as well. Predictions suggest that meeting spend in Asia Pacific will decrease by one per cent . Within the region, Singapore may see the largest decreases of up to 3.7 per cent; Australia is the exception with expected budget increases of 1.9 per cent. With hotel rates expected to increase this is likely to create pressure on individual event budgets.

One planner in the region explains that while cutting costs is a priority for clients, it is often difficult to achieve comprehensive visibility on spending. She suggests that, “Meeting spend is definitely decreasing in the region but tracking spend can often be challenging. Price per person is something everyone wants to cut but in terms of what the meeting is trying to accomplish this might not be the best route. Planning an alternative meeting or combining two meetings into one might the most effective choice. The first step, however, is to get that visibility into spend”.

When asked where they would cut costs in meeting budgets and still maintain the customer experience, one-third of respondents reflect those in other regions in suggesting off-site optional activities as the first to be cut. 13 percent each suggest that reducing the number of nights and room drops would be their first choice.

When asked if overall meetings budget increased 10 per cent where they would make changes, one-fifth of respondents suggest that the preferred area of investment would be to increase the number of meetings and another fifth selected number of attendees at meetings. Nearly one-third stated that they would increase the budget for meeting content and production. These priorities reflect the emphasis we are seeing globally on more attendee-focused meetings with enhanced value. Large cities lead. Unlike other regions, nearly all respondents in Asia Pacific indicate that the primary locations for meetings are large cities. Only 3 per cent identified second-tier city locations as primary for meetings. One survey respondent in Australia suggests that while large cities continue to be top of the list, there may be a need to look beyond them going forward. She explains, “I foresee availability as a challenge in the next 3-5 years. In the past there were clear peak and off-peak periods; now there is consistently high capacity through the entire year.”

The top 10 cities in Asia Pacific based on meetings and events activity remain largely the same as last year, with Bangkok moving into third and pushing Kuala Lumpur into fourth. Mumbai makes an entrance on the list this year in ninth position, taking Beijing’s place

One planner in Australia explains that clients look at destinations outside of Asia Pacific but they are often uneconomical. She states, “In the past we’ve looked mainly at countries in Asia. We are increasingly seeing a desire to go beyond the region, more for smaller meetings and incentive meetings. Attractive destinations out of Australia include South Africa, a few locations in the US, Italy and France. But those destinations are often unattainable from the Australia region, especially for larger meetings”. She and others indicate that location choices are always complex. One planner in Hong Kong explains that location choices are very much tied to corporate policy, whether in regard to spend, preferred suppliers, or duty of care. He felt, “Clients are being more conscious about the locations they are choosing and paying close attention to how specific locations fit with their meetings policies.” 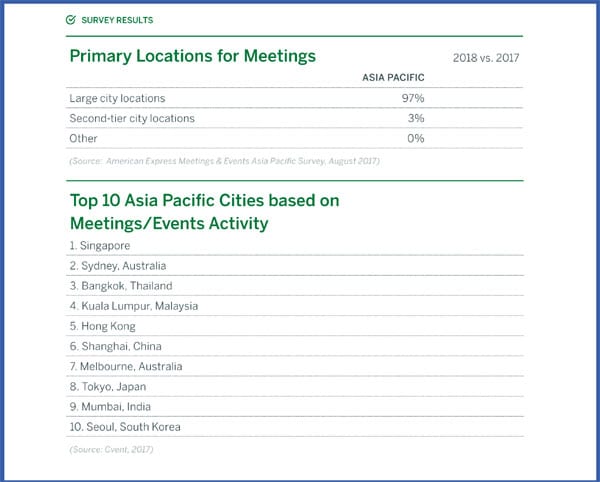 Property types. As with other regions, meetings professionals point to the growing range of possibilities to meet the increasing demand for unique venues. One survey respondent points out that ‘new options for non-traditional venues allow for greater flexibility and creativity in planning meetings and events’.

The Asia Pacific region stands out once again as a more frequent user of luxury properties. One planner in the region speaks to this: “The growing trend is unique venues and high end luxury properties, often with all suites. And meeting owners are more and more considering a range of venues to satisfy the desire for something different”.