The Asian continent is strong and robust, which was evident at ITB Asia 2014. The ASEAN countries made their presence felt and there were a host of buyers ready to talk business By Reema Lokesh 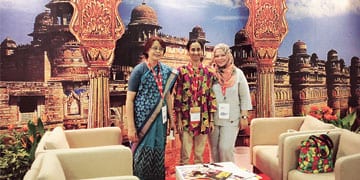 The Asian continent is always referred to and recognised as being big but when it comes to business it is more than just big. While penning this edit I was in the thick of all the action and articulation at ITB Asia in Singapore, where the power of the Asian giant was felt rather strongly in the travel and tourism space. The event witnessed some high power debates and discussions ranging from topics that were intense to inspiring. From the tech touch v/s human touch debate to the online-offline story questioning the survival of brick and mortar set-ups to refreshing pointers on brand positioning, some of the sessions were thought provoking. Sensitive issues of survival and profits, inspiring success stories to emulate, best practices and formulas to be applied in business, using technology to one’s advantage, there was a lot to both learn and unlearn. Knowledge seminars on technology and trade, human resource and responsible tourism ran parallel across the three days with some sessions going off track, however giving the audience an opportunity to both filter and factor in the best practices and solutions that can be applied to businesses for better efficiency and ROI. A dedicated full day seminar on hotel technology proved to be an interesting learning ground. From Qooco based language training to using technology in art and architecture, (the case study of the Sunrise Kempinski Hotel, Beijing for example) to wearable technology in tourism and hospitality, there is lots more that India can adapt and adopt.

The BRIC countries are a focal point of discussion at most international trade events especially in the tourism space. Within them the I and C of the BRIC were discussed at the Global Business Travel Association (GBTA) seminar at ITB Asia 2014. GBTA’s BTI study also forecasts China to overtake the US as the world’s number one business travel market by 2016 and other Asia Pacific countries such as India and Indonesia to grow between 11-14 per cent annually over the next five years. According to Welf Ebeling, vice president, operations, Asia, GBTA, “The second fastest growth market in Asia is India which equally to China showed a 16 per cent growth in the first decade of this century. Over the last 15 years, India has worked its way up the rankings of major global business travel markets from number 24 in 2000 to the world’s 10th ranked market in 2013. GBTA expects India to become the ninth largest business travel market within the next five years.” He further added, “In Asia Pacific, there are a number of countries showing high growth in terms of business travel spend. These markets include Vietnam, Philippines, Bangladesh and Sri Lanka. We forecast an average growth rate of 7.5-10 per cent annually in these markets.” The global business travel spend is expected to reach a record US$ 1.18 trillion by 2014, with nearly 40 per cent coming from Asia Pacific, according to GBTA’s Business Travel Index (BTI) outlook report released at ITB Asia 2014.

This year also saw the strongest buyer participation to-date, with 14 per cent more buyers compared to 2013, informed Christian Goke, CEO, Messe Berlin and organiser of ITB Asia. He further added, “The MICE sector in particular is growing exceptionally, accounting for over half of the total business travel market. It is a very resilient segment that is outpacing traditional corporate travel.”

“The dramatic progress of Asia’s travel and tourism markets, fueled by the rising BRIC economies, testifies once again to the region’s immense potential for growth. Now, more so than ever, we need to encourage greater strategic collaboration among the leaders of the industry. Over the years, ITB Asia has been incredibly valuable in delivering comprehensive market insights and important networking opportunities. We are confident that STB’s partnership with Messe Berlin will continue to boost the success of ITB Asia and anchor TravelRave’s status as the region’s premier travel and tourism week for the trade,” said Neeta Lachmandas, assistant chief executive, Singapore Tourism Board.

This year’s ITB Asia also witnessed a sizeable number of players in the technology space including back-end technology and software solutions providers targeting both the travel and hospitality sector. Incredible India was present at ITB Asia. Punjab Tourism was present in full force and was determined to make its presence felt by aggressively marketing its product.

The 15 finalists of the inaugural National Geographic World Legacy Awards were unveiled at ITB Asia 2014. The World Legacy Awards, a partnership between National Geographic Society and ITB Berlin, showcase the leading travel and tourism companies, organisations and destinations — ranging from historic monuments to eco-lodges and from small islands to entire countries — that are driving the sustainable tourism transformation of the travel industry based on National Geographic’s work of inspiring people to care about the planet. More than 150 World Legacy Awards entries were received, from 56 countries and six continents. Finalists in five categories were selected by an international team of 18 judges, experts in sustainable travel and who will now conduct on-site inspections of the finalists.

Marina Bay Sands, the hospitality partner, worked towards making ITB Asia a green initiative. The team even in the past has worked with a sustainable approach to reduce its carbon footprint by five per cent from 399 tonnes in 2012. This has been done through a range of measures such as choosing food items sourced regionally for the Harvest Menu, utilising newly activated in-room motion sensors to ensuring maximum lighting efficiency in the meeting rooms and setting a room temperature of 24 degrees. The total carbon footprint that was produced during the three-day ITB Asia event was also offset entirely, as per the company spokesperson. The carbon credits will in turn be invested in two regional climate change mitigation projects, Sungai Kerling Hydropower in Malaysia and Wayang Windu Geothermal in Indonesia through the integrated resort’s partner, Carbon Story.

Considered to be the greenest trade show in the region, ITB Asia 2014 worked on a plan to collect all unused booth giveaways and stationery such as notepads and pens from the exhibitors at the end of the show. These will be donated to the integrated resort’s charity partner Food from the Heart. Leftover brochures at the booths werecollected to be recycled. The nature of such a donation and recycling drive is a first for ITB Asia, as well as for Marina Bay Sands, an ISO 20121 certified venue host.

A ‘Date’ in the Desert