A visit to the world’s largest archipelago, Indonesia, unveils not just the natural beauty of its islands but the essence of the land that is rooted in its rich history and multi-cultural traditions. By Sudipta Dev

The island country of Indonesia offers diverse attractions that are as varied as its eclectic culture. From Bali to Labuan Bajo to Komodo Island to Lombok, each destination is unique in terms of the tourism offerings. Bali, which has been India’s favourite outbound destination in 2015, taking into consideration the high growth rate, continues to spellbound even the repeat visitors. With a population of four million, 95 per cent of them being Hindus, one the highlights in Bali are the many Hindu temples, which are distinctively different from those in India. There are thousands of big and small temples ranging from the cliff-top Uluwatu temple to the Goa Gaja temple in a cave and innumerable family shrines that are found within the premises of local homes. There are in fact four types of temples – the family temple; functional temple (for example in rice paddy fields); village temple; and public temple (like Uluwatu). This sea temple, which is in the south western tip of Bali is dedicated to Rudra. The area is famous as one of the best surfing locations in the world. Equally famous (read notorious) are the local denizens (monkeys) who have a reputation of taking off with the belongings of visitors. It is best to visit the temple at a time to catch the breathtaking view of the sunset from the viewpoint. 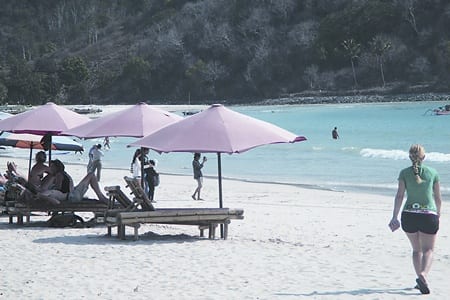 The Goa Gajah temple near Ubud is also called the Elephant cave. The ninth century temple has a vast precinct. The entrance to the cave is marked by intricate carvings. As you walk into the cavernous mouth of a demon, inside the dark cave the sanctum sanctorium has lingas of Brahma, Vishnu and Shiva on one side and a black Ganesha statue on the other. 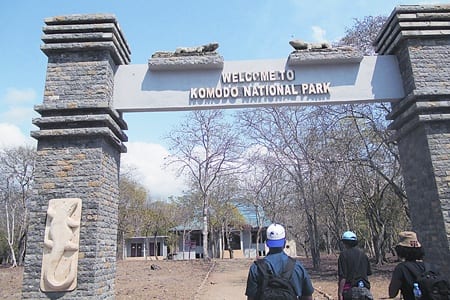 Ubud is of course like a veritable open air gallery with its many handicraft shops, woodcraft showrooms and curio stores. Not surprisingly, Ubud is the best place to buy artefacts and other bric-a-bracs. It is equally important to bargain hard. A Barong dance performance, representing the eternal fight between the good and the evil, is a necessary part of the itinerary. The celebrated terraced paddy fields of Bali continue to spellbind visitors with its picturesque vistas. Even if you are unable to visit the UNESCO World Heritage Site that is a few hours drive away, paddy fields of Tegallalang village in Ubud is an option that should not be missed. The Kuta area in Denpasar is popular for beach sunset and nightlife. Some of the best hotels, including those popular with the conferencing crowd are at Nusa Dua. Tanjung Benoa in Nusa Dua is a paradise for water activities like scuba diving, snorkeling, jet skiing, para sailing, etc. Tourists from other locations in Bali come here for water sports. The government of Bali has a masterplan for tourism development and is developing beach areas for dolphin watching, diving sites, etc. As the focus here is cultural tourism, there are no high rises in Bali in keeping with the environs. The guide also proudly points out the famous Bali Tourism Institute that churns out human resources for the sector in Bali and the country.

Labuan Bajo in east Indonesia is the hub for trips for an encounter with the legendary giant reptiles – the Komodo dragons that inhabit Komodo Island and Rinca Island. Endemic to the region, there are many interesting stories associated with these dragons which are known to be the largest lizards on the planet. These lizards have lived in perfect harmony with human beings who inhabit Komodo Island. The people here are descendents of former convicts. Visitors have an option of choosing the long, medium or short trail. Either way they do get to see quite a few of these amazing reptiles in the national park. All the walks end at the rangers’ canteen which interestingly is one of the favourite haunts of the Komodo dragon, which turns up here sometimes to get food. From Labuan Bajo, it takes an idyllic four hours by boat to reach Komodo Island. There are many small islands along the way including a few where pearl cultivation happens. Kanawa Island is famous for snorkeling. This island has a resort which is a haven for those who want to escape from civilisation for a few days and spend their time discovering the colourful world of corals around these islands. Not too far is the Pink Beach, which is another picture perfect location for snorkeling. There are daily flights from Denpasar, Bali to Labuan Bajo. The seas port at Labuan Bajo has also been improved and attracts cruise ships with tourists keen to see these dragons. Pelni ships ply from Bali to Lombok to Labuan Bajo. Ferries also bring tourists here from different destinations.

Visitors can reach the picturesque island of Lombok in just 35 minutes by flight from Bali and 3.5 hours by ferry. The island has won awards as a halal tourism getaway. Though Lombok is an ideal destination for honeymoon, it is also an emerging MICE location. The largest city here is the capital, Mataram. 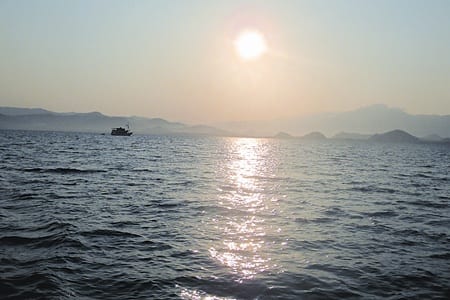 While the island is predominantly inhabited by Muslims, before the advent of Islam the inhabitants were primarily Hindus and Buddhists. There are still many historic Hindu temples like the Batu Bolong temple which is built on a rock. The destination is also home to people practicing Wetu Telu, which is a mix of Islam, Hinduism and animism. Tourists can visit with the Sasak village of Sade in Lombok, where people practicing Wetu Telu reside. They can take a walk around the village, buy local craft items and also watch a cultural performance. Sasak Traditional Tour is a combination of nature and culture including visit to museum, pottery making village, beach, etc.

Mount Rinjani is an active volcano in Lombok, which is one of the major tourism attractions and a highlight of adventure tourism activities that the destination offers. The Kuta beach here is considered one of the best surfing destinations in the world. Even for those not interested in any activities, Lombok is the perfect getaway to relax and unwind and spend hours reading a book or lying on the beach soaking in the rugged landscape and clear blue waters.

In Rhythm with nature

How can David still win?