Opulence in the sky

With the arrival of its new fleet of Airbus 380 and Boeing 787-9 Dreamliner, Etihad Airways has unveiled the most talked about product of the year – ‘The Residence’ by Etihad. The airlines has now entered the race to establish itself as the topmost player in the luxury product segment By Akshay Kumar Etihad Airways, the flagship carrier of United Arab Emirates (UAE) recently received its first Airbus 380 and Boeing 787-9 aircraft’s in Abu Dhabi. With the new fleet, the airline is all set to introduce the Boeing 787-9 in the India market in the first half of 2015. Peter Baumgartner, chief commercial officer, Etihad Airways said, “It has taken us six years to complete our research and innovation to launch these new products, the A-380 and the B787-9 Dreamliner. The initial routes which we are planning for our A-380 will be London, Sydney, New York and Paris and the Boeing 787-9 to Washington, Dusseldorf, Mumbai, Brisbane and Moscow by the end of 2015.” The first A380 commenced its operation between Abu Dhabi and London Heathrow on December 27, 2014 and is all set to fly its B787-9 to Dusseldorf from February 1, 2015. Etihad Airways will further take delivery of four A-380s and three Boeing 787-9s in 2015. 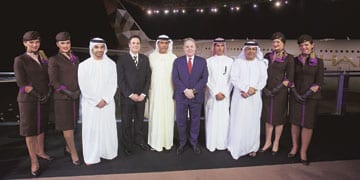 Speaking about the new fleet at the exclusive launch event in Abu Dhabi, James Hogan, president and chief executive officer, Etihad Airways said, “As we have done so many times in our short history, we are reshaping the landscape of modern air travel in our own way. With the launch of these aircraft, we have entered a new era of unparalleled luxury, comfort and service. These innovations represent our vision for the future. Etihad brand is committed to maintain its standards and has crossed all the hurdles to deliver the best product in the industry.”

Speaking about the fuel consumption of the new aircraft, Baumgartner exclaimed, “Especially when we talk about the Dreamliner, it is built with composite material which makes it much lighter. These new aircraft consume 30 per cent less fuel.”

The A380 has a total of 497 seats including 417 in the economy class, 70 in business studio, nine first apartments and one ‘The Residence’ by Etihad. Boeing 787-9 consists of total 235 seats which is split into 199 economy smart seats, 28 business studios and eight in the first suite.

The A380 also features unique inflight products like the inflight lounge and the prayer area on the upper deck. Also the prayer area has a monitor which points towards the direction of Mecca, which is a unique feature only on Etihad.

Etihad Airways has launched its first ‘The Residence’ for Airbus 380, which is their most luxurious innovation till date. Located at the entrance of the upper deck with a total area of 125 sqm, The Residence by Etihad can accommodate single or double occupancy and has a living room, bedroom with a double bed, and an ensuite shower room. Also the guests can experience the personal butler service.

The A380 also offers the first apartment which is a living space with a reclining lounge chair, which opens up to become a separate 80.5 inch long fully-flat bed. Similarly, the first suite on the B787-9 offers guests a suite with mini-bar and centre seats which can be joined to create a double bed.

The 80 business studios are located on the upper deck of the A380, and the B787-9 has 28 business studios, offering aisle access and a fully-flat bed of up to 80.5 inches long. The economy smart seat also makes its debut on the A380 and Boeing 787 and has enhanced comfort with the ‘fixed wing’ headrest on each seat.

With the launch of its new products, Etihad Airways has also unveiled its new crew uniform which has been created by Italian Haute Couturier Ettore Bilotta in Milan. To showcase the fresh look of the crew, the airline organised a fashion show in Abu Dhabi along with the launch of their A380 and B787-9 Dreamliner.

Baumgartner said, “Bilotta, working with our teams, has once again delivered a new uniform which will showcase our brand with characteristic flair at every city on our growing network. The world has been paying close attention to us this year and our new collection will not disappoint. It is our commitment to excellence which marks our arrival as a leader of sophisticated flying.”

The new uniforms will be introduced from December 27, 2014 and will be worn by Etihad Airways’ cabin crews and ground teams, butlers in The Residence by Etihad, inflight chefs, food and beverage managers, cabin managers, cabin crew, flying nannies, and airport and lounge teams. Bilotta commented, “Since the launch of Etihad in 2003, I have come to know the airline, its teams and management very closely, and have developed a style which has evolved, as the airline has grown. For me it has essentially been about dressing a brand and an ethos.” Made from Italian wool, the uniforms feature a complex design and are produced in various locations across Italy, with additional manufacturing taking place in Shanghai, Tunis and Bucharest by a team of around 400 staff. Approximately 30 per cent of the outfits are handmade or hand-stitched.