The recently held Sikkim Association of Adventure Tour Operators (SAATO) conference was aimed towards strengthening ties amongst the North East states of India. It also extended its focus to include Nepal and Bhutan within its plan By Reema Lokesh 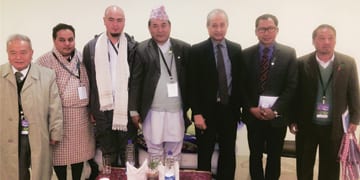 A region that is unlike any other in India, the North East, has its own unique charm and culture. From the place to its people, both are distinct in style and sensitivity. Warm and welcoming they are truly in sync with nature and its offerings. The SAATO conference was held recently in Sikkim, known as the eighth brother of the seven sisters. The chief minister of Sikkim, Pawan Chamling, was the chief guest and he clearly identified tourism sector as the state’s engine for growth and economic enhancement. Apart from declaring the state as completely organic in the agricultural space, he also spoke about hospitality investments in the state as well as touched upon human resource management, training of the youth in the service industry. He also shared his commitment towards sustainable and responsible tourism as part of the state’s agenda. His commitment was once again emphasised by Rup Naranyan Rai, chairman, Sikkim Tourism Development Corporation, wherein he spoke about the need for skilled human resource and capacity building in the sector. Holistic tourism with a clear direction of strengthening the North East and making it ready for the global market is what they aim to achieve. The theme of the SAATO conference this year was ‘Joining hands regionally and promoting the North East tourism globally’, which was earnestly delivered over the two-day conference. The event highlighted the challenges as well as the achievements of the region. There has been a remarkable progress in product development and design but there is a lot more to be done in terms of transportation and logistics. The state is working towards improving connectivity to the North East and with the support from the central government they are aiming to get their act in place. 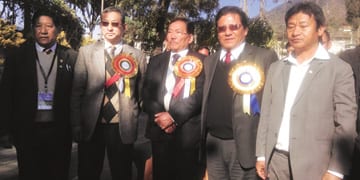 The conference also played host to articulate speakers. MP Bezbaruah, former secretary tourism, government of India and honorary member, North East Council (NEC) highlighted some extremely thought provoking and crucial ideas and solutions for the development of the region. He clearly stated that the implementation of policies can take things forward. It is the time of action and not to think and only draft policies. The council, he said was working towards transformation through tourism. It is the time for regional cooperation and global thinking and outlook. He highlighted the importance of e-commerce, the need to have proper signage, PPP in the right way, linking the North East website to the Incredible India website and also to use the power of the social media in the most effective way. He also highlighted the need for circuit development and connections with ASEAN. The Look East policy is what is being discussed and it is important for PMO to understand what the North East needs. He also made a strong and crucial statement that without a sustainable approach, tourism will become an evil for this region. Training the locals and involving them in the system will only help sustain tourism. He also highlighted the importance of attracting Buddhist tourism traffic for vital course markets in the Asia Pacific. There is a major movement from Thailand into Myanmar for Buddhism, which can easily be tapped into the North East region and further. He also complimented the state for its cleanliness initiatives, the results are for everyone to see.

The magnificent Kanchenjunga mountain range is shared by both Nepal and India. Apart from this world tallest mountain, the Himalayan mountain range is a complete heaven for trekkers both amateurs and professionals. Ramesh Dhamala, president, Trekking Agencies Association of Nepal (TAAN) spoke about the connect between Sikkim and Nepal and how can both the regions leverage from each other’s strengths. He mentioned that the close ties are in terms of religion, culture, adventure and especially in the field of mountaineering. There are 33 peaks on the border and it is time to profile the same to the world as a joint effort towards mountaineering tourism. He stated that mountaineering is serious adventure and it should by no means be treated casually. It is crucial to have minimum standards for guides and trainers. There has to be strict rules and regulations in place. When asked about the recent Anapoorna tragedy he was forthright in mentioning that the calamity was mostly due to human error and little can be blamed on nature. “Mountaineering is not for fun. In Nepal, tourism is a national industry and all entrepreneurs and associations related to tourism are working as a common voice called Joint Tourism Coordination Committee (JTCC). From rafting associations to the airlines and tour operators all are part of JTCC. The team is working on policy making, reviews, destination development, marketing and training. “India is our big market and our major focus is to develop the product as per the need of tourists. We hope to work with India closely and we want to exchange expertise in education in mountaineering. Our focus is on quality tourism,” added Dhamala. He also shared an interesting fact, i e, mountains less than 5,800 m are trekking trails, upto 7,000 m are peak climbs and over and above that is mountaineering. A representative of the Kingdom of Bhutan was also present at the conference. Dipendra Giri, director, Zampling Tours and Travels, Thimphu also highlighted the need for strengthening regional ties. The conference in south Sikkim in Namchi region highlighted some special tourism spots. From Char Dham to the wish fulfilling hill or Samdruptse, guru Padmasambhava statue, the Temi tea garden and a little tour to the under construction Bhaichung Stadium of Baichung Bhutia, the place gives you a close insight into Sikkimese life. Ugen T Gyatso, minister, tourism and civil aviation, government of Sikkim and C Zangpo, secretary tourism and civil aviation, government of Sikkim, stated the plans which are in the pipeline for the state in their department. From helipads to ropeway plans, they are working with the DGCA to get things going. The state is focused oo positioning itself as an organic tourism product, from wilderness tourism to adventure tourism. The minister is keen to set up accommodation experiences in complete wilderness and call it Ekanta Vas and Agyat Bas. The state is also working on an extensive skywalk project at Bhaley Dung amidst others. A state themed food experience is also being built for an authentic Sikkim culture experience. The state is developing new trekking routes and is focussed on showcasing its natural wealth in fauna, organic foods, monsoon tourism, festival tourism amongst others. They are also ready to offer the state for fossil study and hydro project study. Apart from Sikkim, Manipur, Arunachal Pradesh, Meghalaya were also present to showcase their products. P K Dong, consultant, Sikkim Tourism, along with the SAATO president, Y Dorjee, were confident that the efforts of SAATO will reap benefits for the state and the North East in general, in keeping with the theme of the convention. At the end of the session, we were also informed by Bezbaruah that the chief minister has promised to set up restrooms at every 20 km distance on the Sikkim tourism routes.